My studies focus on the transfer of energy from large- and mesoscale oceanic flows to smaller dissipative scales. Internal waves are central to this process, as they are perhaps the only mechanism that acts in the range of scales between the mesoscale (eddies) and the turbulent processes that lead mixing and diffusion. 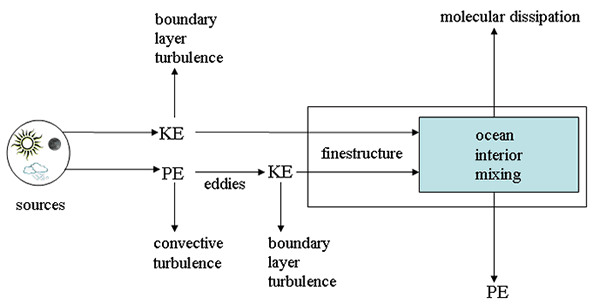 This schematic shows various avenues of energy flow between large-scale sources and dissipation. Some kinetic energy (KE) is dissipated in boundary layers, but some energy cascades to the scale of oceanic finestructure where it is used by turbulent processes to producing mixing and buoyancy flux. Potential energy (PE) also moves in an energy cascade, in some cases dissipating through convective process, but in other cases generating kinetic energy through the generation of mesoscale eddies (St. Laurent and Simmons 2006)