The densest waters found in the ocean interior are formed at several high-latitude sites where atmospheric forcing causes surface water temperature and salinity conditions to match those of the deepest waters. These waters spill into the abyss and are carried equatorward by a system of deep boundary currents. Being far removed from the wind driven Ekman layer, processes such as tides and buoyancy forcing by turbulent mixing often contribute significantly to the flow dynamics. Flow interaction with topography, such as ridges and seamounts, is also an important factor in abyssal circulation physics. 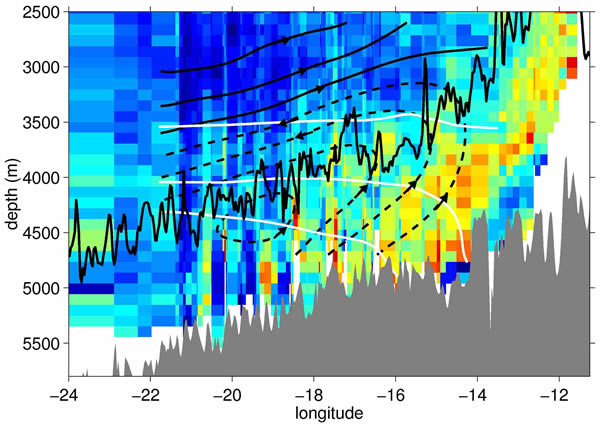 Section across a fracture zone canyon in the abyssal Brazil Basin showing turbulent dissipation levels (in color) from measurements. The shaded topography follows the deepest bathymetry of the fracture zone, while the upper contour shows the shallowest level of ridge topography. An inverse estimate of the circulation streamlines (dashed contours) is shown relative to the density field (white contours). Turbulent mixing in the canyon drives upwelling toward the Mid-Atlantic Ridge axis (St. Laurent, Schmitt and Toole 2001)