The Impacts of Typhoons on the Ocean in the Pacific (ITOP) program was a multi-national field campaign that aimed to study the ocean response to typhoons in the western Pacific Ocean.

ITOP was focused on the following scientific questions: 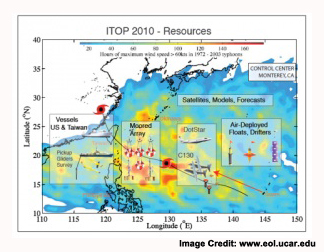 Observing the Evolution of Typhoon Wakes the transfer of heat from the ocean to the atmosphere is the primary driver of tropical cyclones. Viewed as a heat engine, a typhoon extracts heat energy from the warm ocean surface and exhausts it into the upper atmosphere where excess energy is radiated to space and transported toward higher latitudes. Typhoons require high sea surface temperatures (SST) to form, but once formed a typhoon’s maximum strength is governed largely by the amount of energy it can extract from the underlying ocean. In general, the warmer the SST, the more intense the typhoon. However, the tropical ocean is strongly stratified with relatively warm surface waters, usually several tens of meters thick, overlaying colder subsurface waters. As a typhoon travels over the ocean it generates a cold-water wake produced both by strong vertical mixing of the warm surface water with colder water below and by extraction of heat through evaporation that fuels the typhoon. This cold water wakeultimately limits the typhoon’s strength by reducing its energy supply and similarly limits the intensity of succeeding typhoons that might follow in its path. Hurricanes have been identified as significant forcing events for driving ocean mixing in the upper ocean. Boos et al. (2004) used numerical simulations to study how the vertical mixing rate represented by sub-gridscale parameterizations in ocean models should be enhanced to account for the strong  mixing associated with occasional hurricanes over the open ocean. They found that several strong hurricanes per year were enough to significantly elevate mixing levels, causing changes in the thermodynamic state of the upper ocean temperature-salinity relation that were enough to change the climatological state of the model. Sriver and Huber (2007) also have recently suggested that tropical cyclones are drivers of significant vertical mixing, and may be responsible for approximately 15% of the poleward ocean heat transport. Direct in situ measurements of the turbulent mixing in typhoons would useful in backing up the model results. The restratification of the cold wake left behind the typhoon resets the conditions in the upper ocean, and determines how much energy is available to subsequent typhoons that pass through the region. Some of this restratification is accomplished by air-sea heat flux, however, Fox-Kemper et al. (2007) have argued that strong baroclinic instability should occur after the mixing event and have proposed a parameterization for the restratification process by the baroclinic eddies. Observations of the relaxation of the typhoon’s wake would provide evidence of this process and a quantifiable test of this parameterization. While these recent studies have indicated the importance of mixing in the upper ocean driven by tropical cyclones, observations of mixing processes before, during, and after such storm events in the open ocean are nonexistent due to the difficulty in making observations at sea during foul weather. The few observations of the impact of hurricanes on turbulent properties are “before and after” snapshots of data, collected when summer cruises on the Mid- and North Atlantic Bight regions of the continental shelf were interrupted by tropical storms or hurricanes moving up the US coast (MacKinnon and Gregg, 2003). 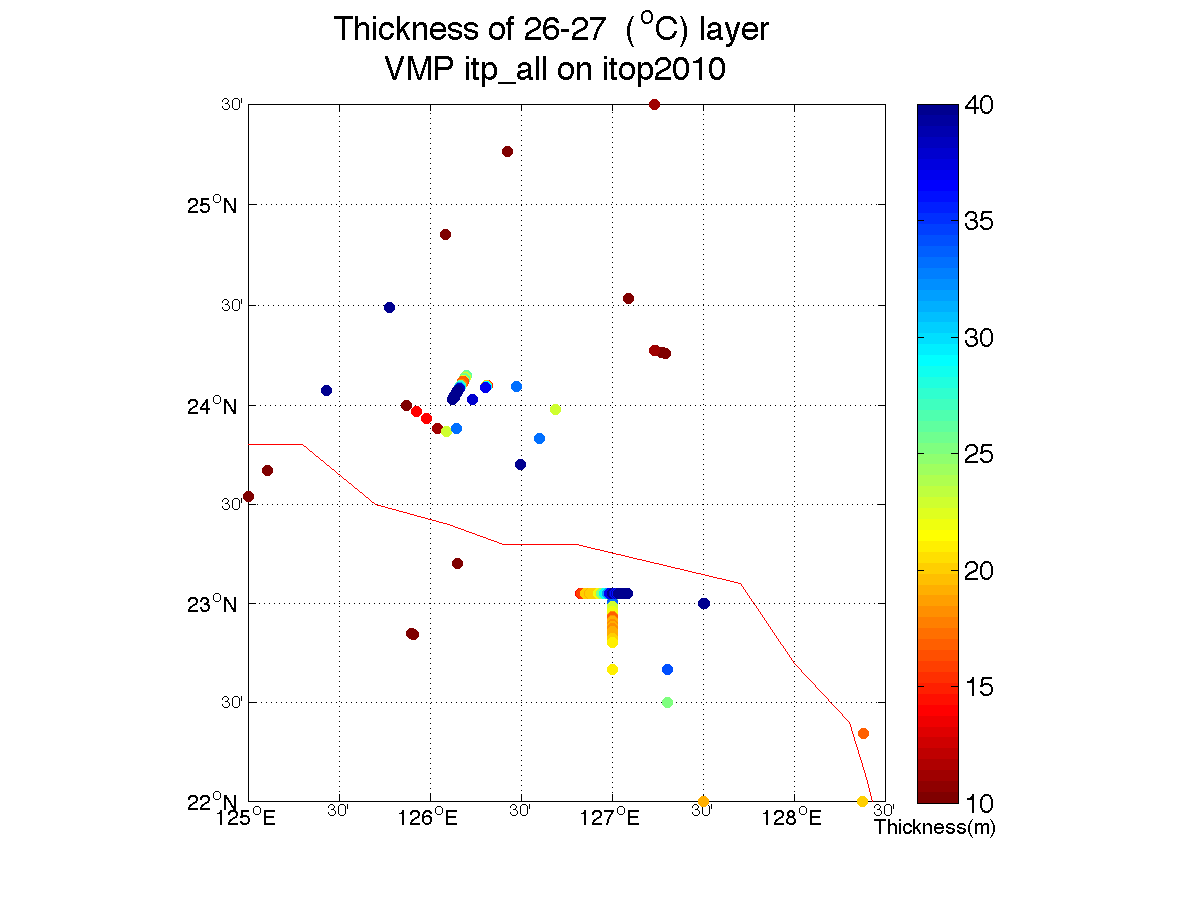 For the ITOP cruise, 172 profiles were performed with VMP SN025 tethered profiler using the hydraulic system from a VMP-2200.  The main players for this cruise were Steve Lambert, and Jay Hooper.  Assistance was provided by several other members of the ITOP 2010 cruise, research technicians and crew of the R/V Roger Revelle. 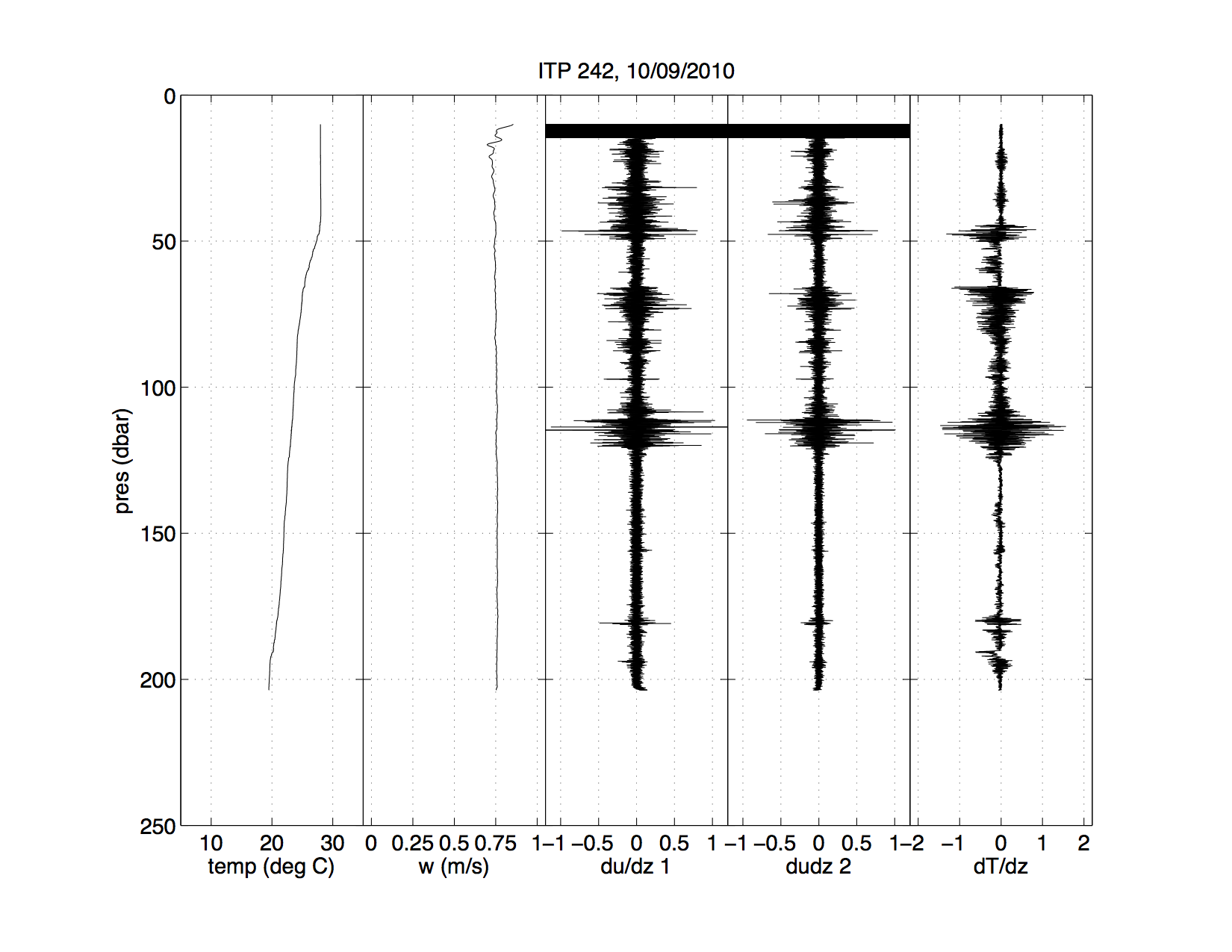