Ocean Turbulence at the Mid-Atlantic Ridge

The work described here is a collaboration with Dr. Andreas Thurnherr at the Lamont Doherty Earth Observatory of Columbia University, and Drs., Valerie Ballu, Gilles Reverdin, and Pascale Bouruet-Aubertot of LOCEAN and IPGP in France. 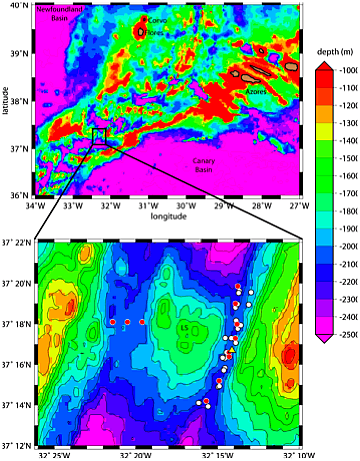 The densest waters of the ocean are formed by convection in several high-latitude seas. These waters circulate at depth below the oceanic thermocline, and communicate the thermodynamic conditions of the polar atmosphere with the entire global ocean. The buoyancy exchange between this water mass and the upper ocean occurs through turbulent mixing, though the turbulence levels throughout the ocean interior vary widely. New observations from the crest of the MAR in the subtropical North Atlantic (location shown at left) suggest that passages (sills and narrows) connecting innumerable small sub-basins in rift valleys and ridge-flank canyons may provide the most energetic sites for turbulent mixing associated with rough topography. In previous studies, these sites have largely been overlooked as significant regions for the conversion of deep water.

Direct measurements of flow and turbulence levels in a deep passage connecting minor sub-basins of the Mid-Atlantic Ridge show mixing levels typical of the ocean’s most energetic hydraulically controlled overflows (e.g. in the Romanche Fracture Zone). Depth-averaged kinetic energy dissipation rates as large as 1×10-7  W/kg characterize the flow 100-200 m above the seabed downstream of the sill. Additional strong mixing was observed up to 500 m above the sill depth, where a strong shear layer separated the substantial flow sustained in the passage from the weaker circulation above. Unlike some previous observational studies of abyssal mixing, our study site is relatively shallow at 2000-m depth, and thus provides a direct mechanism for buoyancy exchange between deep water and the base of the thermocline. 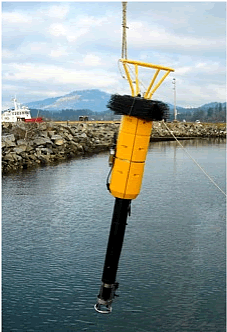 Our measurements were carried out with the use of an innovative instrument system: the Deep Microstructure Profiler (DMP, shown at right). The DMP is a free-falling, autonomous, internally recording, vertical microstructure profiler 5500-m depth rated system made by Rockland Scientific International. The profiler samples all physical parameters during the downward trajectory. Expendable weights are released according to preset criterion, and the profiler returns to the surface. Specifications for the DMP can be found online at the Rockland Oceanographic Services website. In addition to a CTD, the DMP utilizes a suite of microstructure sensors for quantification of the turbulence mixing rates. The measurement of microstructure shear is used to estimate turbulent kinetic energy dissipation (ε), and the measurement of microstructure temperature is used to estimate the dissipation of thermal variance (χ). The profiler samples microstructure variables at 512 Hz as it descends at roughly 0.65 m/s, achieving a vertical full-wavelength resolution of 3 mm. CTD and navigation parameters are sampled at 32 Hz. The FSU DMP instrument system has been supported by the US Office of Naval Research.

The DMP was used to collect 15 profiles of turbulence in the Lucky Strike region, mostly in the passages to the east and west of the volcano. Of these profiles, 12 represent sampling over most of the water column, with 5 extending all the way to the seafloor. Preliminary examination shows exceptionally high levels of turbulent kinetic energy in the deep passages on either side of the volcano, particularly on the eastern side. These high turbulence energy levels are likely the consequence of hydraulic phenomena caused by dense water flowing across the sill bathymetry from south to north in the passages. In the eastern passage, the turbulence levels downstream of the sill are clearly higher than those upstream. More generally, the turbulence levels in the passage are much larger (by 100-1000) than the turbulence levels at thermocline depths above. This data is an exciting finding, as they show that turbulence levels at Lucky Strike are as large as any observed in the deep ocean. The sampling of such a narrow passage (3 km wide by 600 m deep) is also a first in the ocean turbulence community. This data will be used to estimate mixing rates of dense water in the passages, and to examine how thermodynamic balances act between the deep basins to the north and south of Lucky Strike. Our turbulence survey resulted from a generous time-sharing arrangement with the French Graviluck Program and project support from the US National Science Foundation.

A section of turbulence dissipation measurements from the passage at the Lucky Strike site is shown below. The profiles of dissipation rate are shown using a log-scale, as indicated for the profile on the left. Contours separating colored layers indicate the potential temperature in 0.1 C increments from 4 C along the bottom to 5 C at upper edge of the figure. The flow in this passage is from left to right, and the turbulence levels increase significantly downstream of the sill. 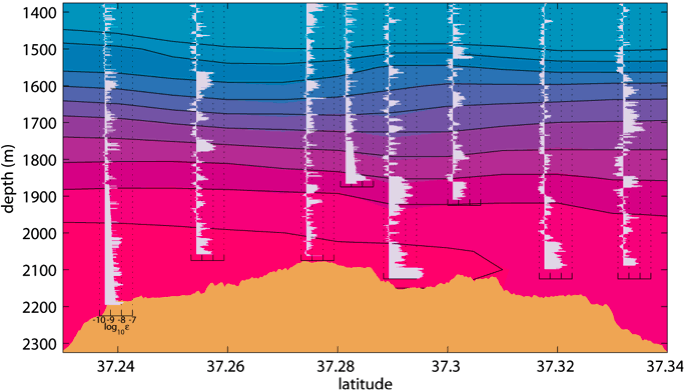 The Graviluck project involved investigators from several institutions. An online journal of the cruise activities was prepared by G. Duveau at CNRS. The entry describing DMP operations can be found here.