DIMES stands for Diapycnal and Isopycnal Mixing Experiment in the Southern Ocean. DIMES is a US/UK field program aimed at measuring diapycnal and isopycnal mixing in the southern Ocean, along the tilting isopycnals of the Antarctic Circumpolar Current.

The Meridional Overturning Circulation (MOC) of the ocean is a critical regulator of the Earth’s climate processes. Climate models are highly sensitive to the representation of mixing processes in the southern limb of the MOC, within the Southern Ocean, although the lack of extensive in situ observations of Southern Ocean mixing processes has made evaluation of mixing somewhat difficult. Theories and models of the Southern Ocean circulation have been built on the premise of adiabatic flow in the ocean interior, with diabatic processes confined to the upper-ocean mixed layer. Interior diapycnal mixing has often been assumed to be small, but a few recent studies have suggested that diapycnal mixing might be large in some locations, particularly over rough bathymetry. Depending on its extent, this interior diapycnal mixing could significantly affect the overall energetics and property balances for the Southern Ocean and in turn for the global ocean. The goals of DIMES are to obtain measurements that will help us quantify both along-isopycnal eddy-driven mixing and cross-isopycnal interior mixing. 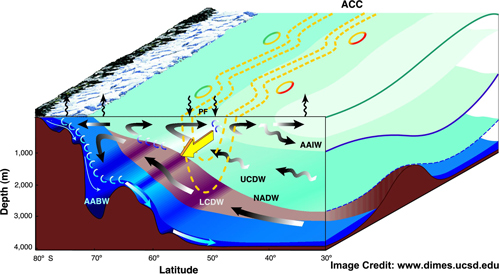 Schematic representation of Southern Ocean meridional overturning circulation. The isopycnal upwelling of Upper and Lower Circumpolar Deep Water (UCDW and LCDW, with sources in the North Atlantic) is supported by mean geostrophic mass fluxes below the level of topographic obstacles to the ACC and by mesoscale eddy-driven mass fluxes at mid-depth. The upwelled water changes density through air-sea-ice interaction. It then returns northward in the wind-driven Ekman layer to form Antarctic Intermediate Water (AAIW), and as Antarctic Bottom Water (AABW) in mean geostrophic flows. The magnitude of interior diapycnal mixing and the rate of along-isopycnal mixing are open for investigation and are the DIMES objectives. 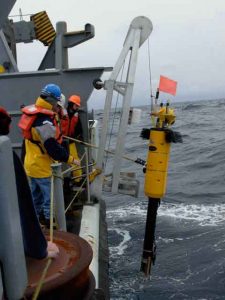