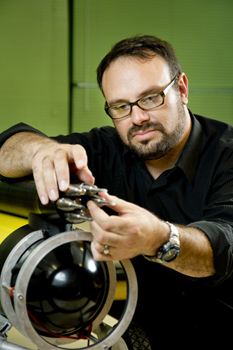 Lou grew up in Hingham, MA. His grand father, Sam Amonte, sailed the Pacific on the USS Princeton 1942-1944, and his father, Larry St. Laurent, sailed the Pacific on the USS Enterprise during 1967-1969. Both men shared their stories of ships and the sea. Lou enjoys all things sci-fi and Lego. He has a particular love for Star Wars, which he first saw during an afternoon matinee in fall of 1977 following morning kindergarten. He plays electric guitar, and enjoys effects of both the analog and digital variety. He has been known to perform a selection of material from Rush during research cruises.